Analysis of The Rogue Trader movie

Analysis of The Rogue Trader movie

Rogue Trader (1999) is a British drama film depicting the life of Nick Leeson, a former derivate broker based out in Singapore. The story is inspired by real-life events that shook the global financial system and led to the collapse of the world’s second-oldest merchant bank named Barings Bank based out in England. The movie is based on a book by Nick Leeson named Rogue Trader: How I brought down Barings Bank and shook the financial world and is one of the greatest examples of why a trader shouldn’t try to fight the market. 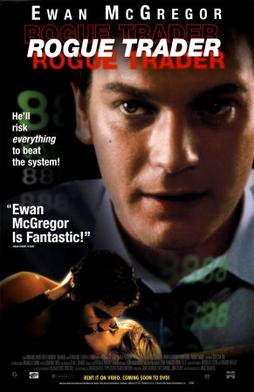 The movie starts by introducing Nick Leeson, a person who starts his career by working for Barings Bank in Indonesia and is later promoted to work as a derivatives trader at the trading seat of the bank at Singapore International Monetary Exchange (SIMEX), Singapore. He was made to look after the trades as well as the back office work of and entering and settling those trades by the end of the day. His job is to trade futures contracts based on Nikkei 225, a stock index at Japan Stock Exchange, on behalf of Baring’s clients, and generate profits by arbitraging the small price difference between SIMEX and Japan Stock Exchange. He hires a team of people to be the floor traders for him and imparts them requisite training for executing the orders. Everything seemed fine until, owing to a trader’s error, Nick accrues a small loss. To cover the losses made by the trader, Nick starts trading futures under a newly formed account numbered 88888, an unauthorized account, which is prohibited under the bank laws. Soon, his trades start falling apart and he starts incurring losses amounting to millions of pounds. To conceal the facts from his seniors, Nick lands up a big client and makes enough commission on his trades to make up for the losses. But since he wanted to play big, instead of making profits by arbitraging his positions, Nick starts to hold on to his positions in expectations of higher future prices.

However, his unhedged positions start pouring in heavy losses when a major earthquake hits Japan in 1995 and the stock market starts dwindling. Still determined to cover his losses, Nick starts buying Nikkei futures in large quantities and tries to move the market in his favor. To meet the margin calls, Nick asks the head office in London to wire him more money to enter bigger deals.  But as the market keeps on falling, the losses start amounting to hundreds of millions of pounds. The management of the bank remains oblivious of the losses that are accumulating in the account number 88888, which is an account operated under a client’s name. Barings back had a poor compliance system and regular audits weren’t carried out in a proper manner giving rise to losses amounting to 800 million pounds, almost double the amount of capital Barings had.

As the market keeps going against him, Nick realizes that his game is coming to an end. Nick and his wife plan to leave Singapore to save him from judicial actions. But eventually, Nick is caught at Frankfurt airport and deported to Singapore where he is sentenced to 6 years’ imprisonment.

The lessons learnt from the movie Rogue Trader are correlated to courses taught in the SimTrade course. The importance of market news has correctly been reflected in the movie by the amount Nick had to pay, trying to fight the trend. The strategy used by Nick to cover his losses known as Martingale’s strategy, or doubling the bets, is a very common mistake traders make in order to cover their past losses, but most of the time it results in even higher losses. A trader should never try to fight the market since it is rightly said that markets are always right, even when they are wrong.

The courses taught on SimTrade teach traders to cover their positions by using different types of orders to protect them from any unexpected market movements. If a stop loss/stop limit strategy would have been entered in by Nick, the losses could have been cut down. A proper investment plan with adequate use of margins and a stop-loss strategy should be put in place by every trader before entering trades. Also, a good trader should never let emotions, such as fear or greed, dictate her judgment.

“I just have to keep buying futures to support the market. If it sticks at 18,000 my options are still in the money. I could get the position back. I may even out ahead.” – Nick Leeson

“Listen to me now. You don’t fight the market!” – Another trader

“The way the market’s going, your losses could be catastrophic.” – Another trader

2 Responses to Analysis of The Rogue Trader movie