Analysis of the Margin Call movie

Margin Call (2011) is an entangling American drama movie based on the events that took place within an investment bank during the financial crisis of 2008. The movie mirrors the impact of high exposure to Mortgaged Back Securities (MBS) that prevailed across big banks and depicts the events that lead to a near fall of an unnamed investment bank based out in New York City. It provides a very good analysis of the present financial system and throws light on the working of some large financial institutions.

Key characters in the Movie 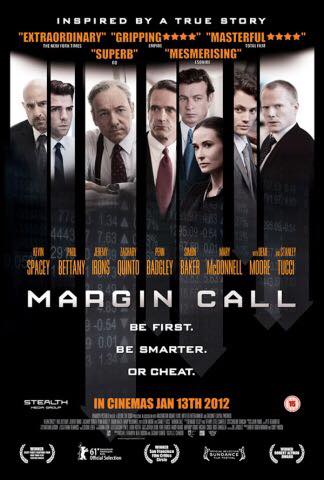 The movie begins by introducing an unnamed investment bank where, owing to decreasing profits, 80% of the staff is getting laid off. Eric Dale, director of the risk management team, is one of the victims of this layoff. Before leaving the office Eric hands over a USB, which contains important analysis that he has been carrying out, to his junior named Peter Sullivan and asks him to complete the model with proper care. During the night, Peter finishes the model and discovers information that has the potential to bankrupt the entire firm. As per the model, the firm was over-leveraged and has even crossed historical volatility patterns many times in the past couple of weeks. If the market value of the firm’s risky assets drops by 25%, the losses would be greater than the entire market capitalization of the firm.

Alarmed by the findings of the model, Peter calls upon his supervisor Will Emerson to check the numbers. An emergency meeting is called up in the middle of the night where all the members of the senior executive committee are present including the CEO of the bank, John Tuld.

Running through the numbers and finding no other optimal way, John orders for an immediate sale of all the toxic financial assets firm holds, before the market could react.

The decision taken by Tuld is demurred by many top executives since they knew that it would destroy the firm’s relationship with all its customers and cause a major blow to the entire financial system. The value of the product they were selling to their customers in the name of MBS was plunging, just as the real estate market in the USA back in 2008.

Initially reluctant, Sam agrees to the sale of the toxic assets in exchange for huge compensation from Tuld. Sam orders all the traders on his floor to unwind their positions in the toxic asset purely in cash deals and offered them huge bonuses and commissions once they achieve a set target. Information about the company’s misdemeanor is spilled out and the traders are forced to sell at significant discounts.

Once the target sale is achieved and all assets are cleared, another round of laying off starts and most of the employees are let go with hefty compensations and bonuses. Sarah Robertson, the chief of risk management, is used as a scapegoat and also dismissed from her duties. Dismayed, Sam reaches out to Tuld to explain to him about his longing to leave the firm.  Tuld reminds him how the current crisis is no different from the previous crises and how the proportion of winners and losers always remains the same. Entwined between the dubious system and the need for financial resources, Sam decides to continue with the firm for another 2 years in anticipation of earning more money.

The concepts shown in the movie correlates to the concepts of ‘Demand & Supply’ and ‘Financial Leverage’ taught in the SimTrade course. During the first decade of the 21st century, low-interest rates prevailed in the US economy giving rise to debt-financed consumption. The easy availability of sub-prime housing loans lured people from the lower strata of the society to avail the benefits of it. Subsequently, the increase in loan availability raised the demand for customized securities which came in the form of MBS, which became a trending asset in the market. The financial bubble kept on building up as the intrinsic value of MBS started dwindling. The falling asset value affected the investment bank as their business model was built on high exposure to these assets.

Also, this high exposure to subprime mortgages and toxic assets subsequently led to high level of leverages at the firm and statistical models of VaR (Value at Risk) and historical volatility failed to show a potential downside which could result in losses greater than the entire value of the firm. The risk models used by the firm considered the positions of other firms in the same assets and were not effective enough to take into account the risk magnitude of black swan events such as the default rates on subprime mortgages, the root cause behind the financial crisis of 2008. The financial damages and moral hazards associated with such an event are justified by the discount rates traders had to offer to unwind their position and also the client trust the firm lost as collateral damage. The movie shows the rationale of firms, referred to as too big to fail, in dealing with situations created as a by-product of their own actions.

“Sometimes in an acute situation such as this (referring to the sale of all toxic assets), often, what is right can take on multiple interpretations.” – Jared Cohen

“You know, the feeling that people experience when they stand on the edge like, this isn’t the fear of falling; it’s the fear that they might jump.” – Will Emerson

This entry was posted in Contributors, Movies and documentaries. Bookmark the permalink.

2 Responses to Analysis of the Margin Call movie