High-frequency trading is a system that executes buy and sell orders by utilizing an algorithm-based computing platform. The turn of the millennium saw the advent of High frequency trading becoming popular with around 10% of all the trades being executed using algorithms. Initially, the time for execution of trades using HFT was several seconds which eventually shrunk to microseconds and subsequently to nanoseconds by 2012 with the invention of Nano Trading Technology.

The new technology was launched into the market by a firm named Fixnetix and was powered by a microchip executing trades in nanoseconds. By 2012, around 70% of all the US equity traded were executed using HFT platforms. Propagators of this technology credit it with increasing the market liquidity and narrowing the bid-ask spread in financial markets, thereby making markets more efficient.

A flash crash refers to a rapid decline in the prices of securities or commodities triggered due to several reasons, automated trading being a primary one.

The computer-based trading technology suffered a lot of criticism during the year 2010 when an algorithm-driven sale of $4.1 billion worth of E-mini futures, resulting from political tensions arising in Greece, brought short term turbulence in the US markets. The futures sale triggered a rapid 1000 point or 9.2% drop in the Dow Jones Industrial Average which was unprecedented in history. The initial sell order resulted in a wave of other sell-offs triggered by the designed algorithms, causing a big downfall in the market. The orders resulted in a whip off of around $1 trillion in the total market value. However, the dip didn’t last very long and the markets recovered by the end of the day, closing at 3% lower than the previous closing price. But the sudden crash made SEC aware of the dangers the algorithm-based trading carry and made them skeptical about its usage. 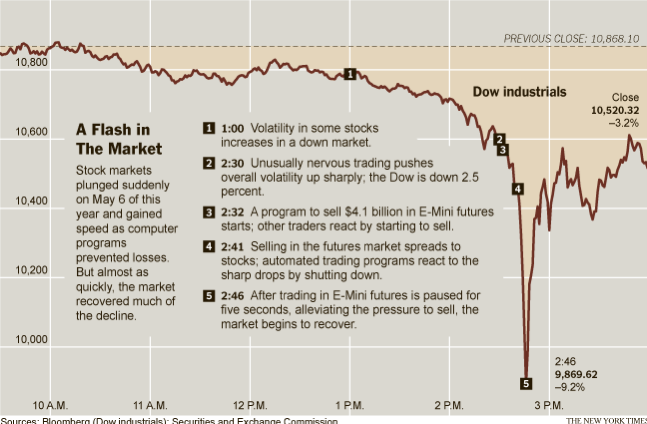 The Flash crash of 2010 has resulted in HFTs being subject of regulatory discussions, with critics citing it as a major reason for increased volatility and uncertainty in the markets. Also, HFT has been regarded as a bane for the modern financial markets as it gives an unfair advantage to large scale firms, not providing a fair playing field to small scale investors.

Relevance to the course

With most of the big firms employing computer-based technology to execute trades, the concept of high frequency trading dominates the financial market in the present days. The Simtrade platform encompasses courses on exchanging orders and the different types of orders a trader can enter to execute his position. Coupled with algorithm-based platforms, basic knowledge of orders can provide a trader with an excellent opportunity to execute 1000s trades simultaneously across different markets. With more and more regulations coming in, the evolution and increased usage of HFT’s can play a key role in increasing the overall value of a trader’s portfolio.

An interesting video to understand the 2010 crash:

One Response to High-frequency trading