This article written by Kunal SAREEN (ESSEC Business School, Global BBA, 2021) analyzes he Wall Street movie and finds out its relevance for the SimTrade course.

The Wall Street movie (1987) has been regarded as a movie that entails a day in one of the world’s largest financial markets which is truly enlightening and entertaining at the same time. It functions as a movie which is not at all an exaggeration of how the world of the financial markets operate in the daily life and puts light on how at times people end up in the market. Lastly, it focuses and enlightens on concepts of a financial market which seems to be excessively interesting and correlates with some of what we study in the SimTrade course in the ESSEC BBA program.

In the 1980s, a character named Bud is a junior trader at Jackson Steinem & Co. He aspires to work with a renowned Wall Street player he admires, Gordon Gekko. He works in the city of the Wall Street, New York, where he tries to call Gordon Gekko’s office as many times as he can, every day, in a row. But at last, he is not able to secure an interview to have a possibility to be working with him. At last, to make things work, he plans to visit Gordon Gekko on his birthday where he brings him a gift, Contraband Cuban Cigars, in hope that he will be able to land an interview at his firm. 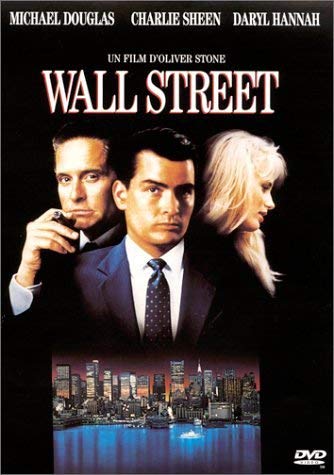 In response to Bud’s gesture and the courage that he implied by his actions, Gordon Gekko is inclined to offer him an opportunity and he gives him the interview that he for so long worked for. On his interview, Bud Fox pitches Gekko a portfolio of stocks at the end of which Gekko is left unimpressed. In a last attempt, Bud plays his last card and tells him inside information about Bluestar Airlines which he overheard from his father.

Gordon Gekko is curious yet intrigues and unsure. He asks Bud for time to think about their conversation. Gordon Gekko ended up placing orders for Bluestar Airlines’ stocks and ends up becoming a client of Bud. At the end Gekko gives capital to Bud to manage and investing a portfolio of stocks. But Bud ends up losing money on all the other stocks that he selects. Gekko offers a last resort to Bud and offers him to keep his job in exchange of spying on a British CEO, Lawrence Wildman and figure out his upcoming plans of investments. Bud learns the fact that Wildman’s next plan is to invest in a steel company. Through Bud, Gekko ends up making capital gains and Wildman is obligated and forced to buy Gekko’s shares to complete the takeover.

Bud ends up rich with an office and a relationship. He goes on to engage in illicit trading activities and makes a lot of money for Gekko and himself. In the dark, Bud does not realize that he is being put on the hotlist by the SEC.

Bud pitches a plan to Gordon Gekko, which is to expand the Bluestar Airlines after buying it. Bud does all in his power to push the deal through. In no time, Bud learns that Gordon plans to dissolve the company to be able to use the funds trapped in the pension plan, leaning all of the company in ashes. Bud has an idea which involves driving up the stocks of Bluestar before manipulating them back down. The other Union Presidents along with him arrange a meeting in secrecy with Lawrence Wildman and get started on their plan for him to buy controlling stake in Bluestar Airlines with a significant discount. Gordon Gekko, realizing that his stocks are plummeting, gets rid of his remaining stake in the company on Bud’s advice only to realize that Lawrence Wildman is purchasing the stocks of Bluestar Airlines at a discount and realizes the Bud had maneuvered all of that.

In the end Bud gets arrested for insider trading and ends up cooperating with the SEC to get a lighter sentence and helps them arrest Gordon Gekko.

Relevance of the Wall Street movie for the SimTrade course

The SimTrade course focuses on the concepts of observing the market news and using types of orders to trade and create value at the end of the trading period, which of course goes into detail. It focuses on all aspects of a market in terms of trading in the form of courses, simulations, contests and case studies. All the forms talk about different paradigms of the market and explains how the market functions in reality.

The movie correlates with the concept of market efficiency where it shows that the market functions as a semi-strong efficient market at best. Since private information is not embedded in the market price of the stock and there is a possibility to make gains which are more than the market gains by taking advantage of the fact that private information is not taken into account of the stock price. In the regard, how that is illegal and unethical to perform and comes with white collar punishments from the judiciary.

Lastly, it correlates with the function of the market where there must be sellers for the buy side and buyers for the sell side, as Gekko sells and Wildman buys, at a price that meets the buy and the sell side, for an order to be fulfilled and a transaction to occur.

Famous quote from the Wall Street movie: “Greed is good”

Watch Gordon Gekko explaining “Greed, for the lack of a better word, is good” to the shareholders during the General Meeting of their company.

This entry was posted in Contributors, Movies and documentaries and tagged Movie, Wall Street. Bookmark the permalink.

One Response to Analysis of the Wall Street movie