“Other People’s Money” is a film about a near obsolete publicly traded company, the New England Wire and Cable Company, interwoven with romance and community spirit. Issues arise because the original wire and cable division has become an obsolete parent firm of an otherwise profitable group of subsidiaries, but it employs much of the town’s population. While exploring the world of hostile corporate takeovers and the market for corporate control, this film shows the human impact of shareholder decisions. Good capitalism and greed clash in this fight to keep shareholders satisfied and save the factory from a dying industry.

“Other People’s Money” directed by Norman Jewison, delves into the hostile takeover of New England Wire and Cable Company (NEWC) by Garfield Industries, where corporate raider Lawrence “Larry the Liquidator” Garfield is president. New England Wire is a publicly traded, debt-free company founded and managed by the Jorgenson family. Garfield arrives offering a peaceful takeover, explaining that the wire and cable division is in a dying industry, and is harming the profitable subsidiaries by depressing the share price. He believes that liquidating the harmful wire division is necessary to act in the best interest of the shareholders. However, Jorgenson denounces this offer as a death sentence for the employees and their town, arguing that companies should protect their community and have social responsibility. However, the market value of the company’s common stock decreases to equal less than the underlying value of its assets. Garfield then makes a takeover attempt, which culminates at the company’s annual shareholders’ meeting with Garfield succeeding in closing the wire and cable division of NEWC. The film ends with Kate Jorgensen calling with good news from a Japanese automobile company, who are interested in hiring the NEWC to product stainless steel wire cloth instead of wire. 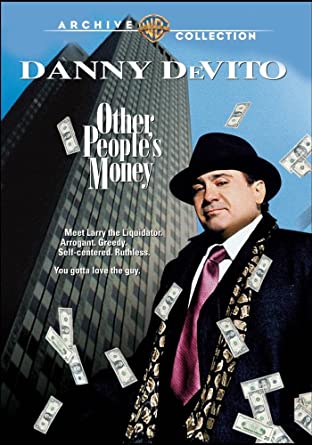 Financial concepts from the Other People’s Money film

Other people’s money (OPM) is a slang term referring to financial leverage, whereby using borrowed capital it’s possible to increase the potential returns, but also increase the risk, of an investment. In the film, the NEWC had an inefficient capital structure with no debt to leverage the company. Instead the company had a high amount of cash and liquid assets, as well as a fully funded pension plan for its employees, but had a debt-to-equity ratio of zero. There are trade-offs to having a higher debt-to-equity ratio, but in this case, leveraging OPM would have allowed the NEWC to remain in business by transitioning into a more profitable industry.

Corporate restructuring is a process where the structure or operation of a company is significantly modified, usually in periods of significant distress and financial jeopardy. This could involve for example, mergers, takeovers, or divestiture. In this film, Garfield persuades the shareholders to divest of the failing division by selling the division and its remaining assets. Kate Jorgensen offers a better solution – a Japanese automobile company which will hire the NEWC to produce stainless steel wire cloth, allowing the company’s assets to be repurposed instead of liquidated.

A corporate takeover refers to when one company makes a bid to acquire or take control of another, without necessarily obtaining the actual title. A takeover is usually done by purchasing a majority stake in the shares of the target company. In the film the NEWC is debt-free, making it attractive to corporate raiders or ‘takeover artists’, who aim to provide shareholders with a better return for their money.

The market for corporate control is the role of equity markets in facilitating corporate takeovers, and mainly refers to the market for acquisitions and mergers where there is competition for control rights. In this film, takeover artist Garfinkle is blocked from purchasing more shares in the NEWC by a judge’s injunction. He fights this as he believes that a free market for corporate control is needed to enable restructuring essential for the company to remain competitive. As a value-focused individual, Garfinkle believes in market dynamism as an effective tool for poor management, where market forces put pressure on managers to perform or risk sale of the company.

Creative destruction is the union of evolutionary natural selection and economics. Resources are necessarily scarce, so the world advances only when outdated industries are encouraged to die quickly, allowing capital to be reallocated to more efficient and innovative industries. In this film, cable and wire is a dying industry due to the widespread adoption of fibre optics, so Garfield encourages shareholders to sell to him and reallocate their money towards a more productive venture. The underlying assumption is that though a transitioning industry will cause disruption, there is more to gain than lose when capital is put to best use and assets are used in an economically rational manner.

As investors, the main goal is often to maximise wealth, and the game of making money can make it all too easy to value a business solely on its share price. However, this film shows that behind the numbers are the people who keep the business afloat, and who in turn rely on employment at the NEWC to support themselves. Jorgensen’s focus is on his social responsibility to the employees whose livelihoods depend on the wire plant, while Garfield believes in free enterprise and shareholder wealth maximisation. It’s clear that a balance between the two is required to create ‘good capitalism’, where all parties involved are treated fairly and humanely.

Many sides to every story

A meaningful insight from this film is that both players had valid reasons for their actions. While Garfield is painted as profit-focused at the expense of the employees, he’s also acting in the best interests of the shareholders – he refuses to take a “greenmail” bribe because he believes it would be immoral to sell out and victimise the shareholders whose funds are not being put to best use. Conversely, while Jorgensen is painted as the town’s hero, he is also neglecting his obligation to the shareholders by failing to recognize that his company was in a shrinking market, and would become obsolete if he did not accept innovations in the industry. This dual perspective is an introduction to business ethics, showing how utilitarian thinking can clash with other ideals pushing social responsibility and awareness. As investors, this is a reminder that there are always many perspectives to an issue, and real life is never black and white.

SimTrade is a course designed to teach investors how the market works, including how to make orders and build a market position, while also teaching investors how to interpret and understand what these numbers represent in the real world. A combination of theory and practice helps you to understand the complexities of the stock market – including firm valuations, the impact of events on stock prices, and how to appreciate the degree of market efficiency.

The Other people’s money concept is introduced in Period 3 of the SimTrade certificate:

Famous quote from the Other people’s money film

About leverage: “I love money. I love money more than the things it can buy. There’s only one thing I love more than money. You know what that is? Other people’s money.”

Watch Garfield making his point about wealth maximisation at the shareholders’ Annual Meeting of their company.

Trailer of the Other People’s Money film