Analysis of the Trading Places movie

Analysis of the Trading Places movie

You will find below an analysis of the movie Trading Places (1983) and its relevance to the SimTrade Course.

This analysis has been written by Akshit GUPTA (ESSEC Business School, Master in Management, 2022).

Trading places released in 1983 is an American film which involves a Philadelphia based commodity brokerage firm Duke & Duke Commodity Brokers, named after their owners Duke Brothers, the kings of the stock exchange. The movie is a great blend of entertainment and enlightenment on some of the key issues observed in financial markets on a very frequent basis. 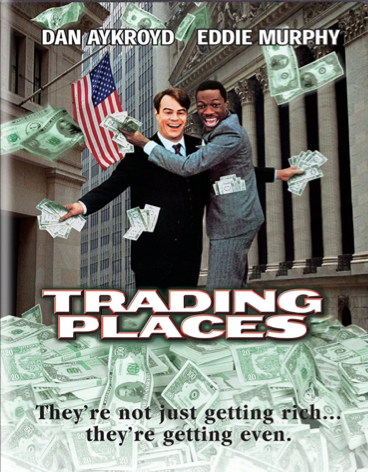 To understand the movie, the key characters are:

The movie starts by introducing two brothers namely, Randolph and Mortimer Duke, commonly called Duke Brothers, who run a successful commodity brokerage firm, Duke & Duke, in the state of Philadelphia. The brothers, who have very opposing viewpoints in their day to day life, make a wager and carry out an experiment of switching the lives of two people named Billy Ray Valentine and Louis Winthorpe, who are on vertically extreme ends of the social hierarchy and oblivious of each other’s existence. The experiment was to observe the behaviour of the two people involved and see if a street hustler is capable enough to run the company successfully.

Billy Ray Valentine is the homeless street hustler who resorts to panhandling to earn his livelihood. On the other hand, Louis Winthorpe is a managing director at the firm Duke & Duke, who is wrongly framed and convicted as a thief and a drug dealer by Clarence Beeks, a man working for the Duke Brothers, owing to which Winthorpe loses his job at the company and is sent to jail.

Being a man of values, Valentine seeks out for Winthorpe and sets up a plan to bring the brothers down by turning the tables.

The Dukes were about to use inside information regarding an “orange crop report” set to be declared in the first week of January by Clarence Beeks, representing the United States Department of Agriculture. Winthorpe and Valentine set up a plan to obtain the report from Clarence Beeks before it reaches the Dukes and replace it with a forged report which states low orange crop yields which thereby increases the future commodity prices. They are successful in executing their plan and sending out a forged report to the Brothers.

On the day when the report is to be declared, Duke Brothers start buying future contracts for frozen orange juice. Following their call, other traders also start taking a long position in the frozen orange juice commodity, hence, inflating the prices many folds.

On the contrary, Valentine and Winthorpe short sell these contracts at that higher price.

When the crop report is broadcasted and it predicts a normal crop harvest, the commodity prices start crashing. Valentine and Winthorpe close their position by buying these contracts at a lower price and earning huge profits thereby bankrupting Duke Brothers who now have an accumulated debt amounting to $394 million.

During Period 1 of the SimTrade course, concepts related to the use of market news, types of orders and market efficiency were discussed in detail and were also put into application. It showed how every order fulfilled a different purpose, how prices changed due to individual intervention and how markets functioned in reality.

The movie deals with the financial concepts of “market efficiency” and “insider trading”. It projects how the commodity market functions as a semi-strong efficient market where all the historical market data and other publicly available information are factored in the prices of different commodity futures but the private information is what helps a trader achieve exceptional return or a return more than the market return.

The movie also covers the important concept of demand and supply that drag the prices in a stock market. The concept entails the necessity of having a buyer, a seller, a trading platform and a mutually agreed-upon price to complete a transaction.

Moreover, it covers the traditional style of trading wherein all deals were done manually on a trading floor with a concept named ‘open outcry’.

However, what this movie fails to project is the unethical and illicit nature of using such private information to make exceptional gains and the judicial charges such actions bear in the present world.

More specifically, the movie relates to the following concepts in different periods of the SimTrade course:

Famous quote from the movie

Trailer of the Trading places movie (1983)