Analysis of the Barbarians at the Gate movie

Analysis of Barbarians at the Gate movie

Analysis of the movie

Barbarians at the Gate (1993) is a television movie based on a best-selling book by Bryan Burrough and John Helyar. The movie focuses on the leveraged buyout of RJR Nabisco that took place in 1988, making it the largest buyout till that date. It is a classic example of the takeover spree occurring in the financial system at that point in time and how the battle for taking control of a company ended up with a whopping deal value of $25 billion. The movie teaches us some really important lessons on corporate greed and the execution of multi-billion dollar deals. 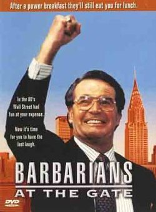 The movie starts by introducing F. Ross Johnson, the presiding president and CEO of RJR Nabisco, a tobacco and food company headquartered in New York City. The tobacco division of the company has been working busily on the development of a smokeless cigarette named ‘ Premier’, the introduction of which is believed to drive up the stock prices of the company which have rather been sluggish for a long time.

Ross’s friend Don Kelly introduces him to a banker named Henry Kravis, who has helped Don carry out a leveraged buyout for his company and is an expert in LBOs.

Due to negative feedback received during market sampling of Premier, Ross decides to take the company private in order to save it from further stock dips and public embarrassment. He considers leveraged buyout as a potential way to pay his shareholders, by keeping the business of his company as collateral. To carry out the buyout, he hires Shearson Lehman Hutton (a division of American Express) as his primary banker, with Peter Cohen leading the charge. Ross initially bids $75 per share (amounting to $17.6 billion in total payables) to the Board of Directors, much higher than the current market price of $53, to attract the shareholders.

Since the idea of a leveraged buyout was introduced to Ross by Henry Kravis, he doesn’t like the act Ross carried by going behind his back and hiring another firm to look after the takeover. Although Kravis didn’t have substantial financial information regarding the company, he gives an offer of $90 per share amounting to a total cost of $20 billion, giving rise to a bidding war. A series of negotiations start with many major wall street bankers and lawyers swamping Ross with their offers. Meanwhile, the confidential offer details presented by Ross gets leaked in the media, bringing negative publicity for him.

With Ross and Kravis unable to come up to a settlement, final offers are asked for by the Board of Directors to be presented in the general meeting. Although Ross submits an offer of $112 per share, Kravis’s offer of $109 per share is taken into consideration and gets accepted by the Board. The Board justifies their move by showing a leaked article in the New York times stating $2.5 billion in profits Ross’s management company would have made by taking a 20% stake in RJR Nabisco. Ross wanted to own the company to continue enjoying the lucrative benefits and not for increasing its shareholder value. The Board became aware of his intentions and decided to go with the private equity firm, which is referred to as ‘Barbarian’ in the movie title.

The concepts shown in the movie correlates to the courses taught on the SimTrade platform. The movie portrays the importance that company-specific news plays in deciding the stock price movements. The courses taught on SimTrade also teaches us to focus essentially on the current financial news to benefit from it. The movie showcases the typical acquisition of a company by the use of leverage buyout and how the buyout wave started in the early 1980s. In a financial context, a leverage buyout refers to an acquisition of a company, division, or business using a large portion of borrowed funds or debts to finance the transaction. They are often considered to be good for acquiring a company but in certain circumstances, LBOs can also leave a company with a great pile of debt to repay. The movie is also a perfect example of things that money can’t buy which includes trust, loyalty, and respect.

Most famous quote from the movie

“It’s not the company. It’s the credibility. My credibility. I can’t just sit on the bench and let other people play the game. Not my game. Not with their rules.” – Henry Kravis

▶ Gupta A. Analysis of Other People’s Money movie

This entry was posted in Contributors, Movies and documentaries and tagged Financial levarage, Wall Street. Bookmark the permalink.