Analysis of Other People’s Money movie

Analysis of Other People’s Money movie

Other People’s Money is an American comedy-drama film launched in 1991 based on a play written by Mr. Jerry Sterner. The story replicates the existence of a corporate takeover and presents arguments both in favour of and against such moves. There have been stories of many selfish people existing in the financial system, stealing jobs and leaving lives tarnished using hostile takeovers. But the arguments presented in this movie will make you think twice about the actions of corporate takeover and the rationale behind them. 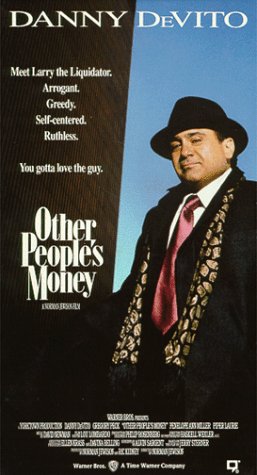 The movie starts by introducing a corporate raider named Lawrence Garfield, or commonly known as ‘Larry the Liquidator’, who is well known for buying over companies and selling off their assets. He uses a computerized stock analysis program named Carmen to select targets for his next takeover. With the stocks of New England Wire and Cables rising, the algorithm presents this company as a new target for Larry. The company is a second-generation firm run by Mr. Andrew Jorgenson (called Jorgy) and has three major divisions with wire and cable division under losses for many years. The hard work put in by Jorgy has made his company perform reasonably well with no debts and ample cash reserves. Impressed by the company’s financials and its stock price being undervalued, Larry poaches the chairman, Jorgy, with a takeover offer which he denies. However, determined to purchase the company, Larry starts purchasing shares from the open market driving up the stock price from $10 to $14 and filing Statement 13-D which states the purchase of a minimum of 5% of common stock ownership in a company. Becoming aware of the filing, Jorgy reaches out to her daughter named Katy Sullivan, a corporate lawyer, to protect the interest of his company from such a hostile takeover attempt.

Kate, taking immediate action, brings in an injunction to stop Larry from any further purchase of shares, based on a technicality, till the matter gets settled. Larry complains about such moves hampering the spirit of a free society and capitalism by preventing speculators like him to purchase shares.

To provide for an out of the court settlement, Kate proposes a greenmail offer to Larry which will be a win-win for both the parties, but it eventually gets declined.

Unable to reach a settlement, Larry and Jorgy decide to leave the judgment upon the shareholders by calling for an Annual general meeting and having a proxy fight.

During the AGM, Jorgy appeals and tries to sway the shareholders with his heartfelt speech where he claims of caring more for the employees and their loyalties to his company rather than money. He ridicules the concepts of maximizing shareholder wealth and says that a company is far more than its stock price. But, Larry becomes successful in convincing the shareholders about the benefits of a takeover and how he can provide them with a very good price for their shares. In the end, the proxy voting is won by Larry, giving him the controlling interest in the company and leaving Jorgy feeling betrayed.

The movie concludes with Kate bringing up a business contract to Larry for manufacturing airbags, offered to New England Wire and Cable company by a Japanese company. She proposes to buy back the company from Larry at a mutually negotiated price.

The topics introduced in this movie correlates with the courses taught on SimTrade platform. The SimTrade course teaches us the concept of market information and the movie exhibits how such information is put to use to make decisions about buying or selling of stock. The movie also portrays how demand and supply play a primary role in bringing momentum in a market.

A new concept introduced in the movie deals with the use of greenmail, which is a defense mechanism adopted by companies to prevent takeover attempts. Under this mechanism, the target company repurchases the shares at a higher price, to retain the control. Also, the movie shows the importance of value investing by using the fundamentals of a company to determine whether the company is under or overvalued compared to the market price.

“Someday, we’ll smarten up, change some laws, and put you out of business.” – Kate Sullivan

“They can pass all the laws they want. All they can do is change the rules. They can never stop the game. I don’t go away. I adapt.” – Lawrence Garfield

▶ All posts about financial movies and documentaries in the SimTrade blog

▶ Akshit GUPTA Analysis of Barbarians at the Gate movie

This entry was posted in Contributors, Movies and documentaries. Bookmark the permalink.