Film analysis: Too Big To Fail

Film analysis: Too Big To Fail

A pervasive moral stigma follows the financial sector, which has a dogged reputation for unethical and illegal behaviour. However, the ethical lapses often associated with finance are not always intentional. Instead, a contributing factor is that the teaching of finance and other business disciplines presents the challenge of linking theories and conceptual models to the “real world”. Entertainment media – such as films or books – are useful in this aspect as case studies; they provide students with an organisational frame of reference to better understand both situational contexts, and importantly, the human dimension behind financial numbers.

“Too Big to Fail” is a dramatic retelling of the near collapse of the US banking system during the 2008 financial crisis. No-one saw the financial crisis coming, nor knew how to deal with the disaster when it arrived. This film follows financial leaders US Treasury Secretary Henry Paulson and Ben Bernanke as they try to protect a faltering U.S. economy, and eventually offer a no strings bailout, but leaves Paulson wondering if banks will lend. The issue of moral hazard is explored and begs the question, should banks really be too big to fail?

“Too Big to Fail” gives a behind the scenes look at the conversations between major players during the 2008 financial crisis from March to mid-October. In 2008, Lehman Brothers were on the verge of collapse and its CEO Richard S. Fuld Jr. blamed the declining share price on short sellers, refusing to recognize his bank’s weaknesses. Instead, he sought a cash fill from Warren Buffett, and even pursued mergers with Bank of America (BOA) and Barclays. Treasury Secretary Henry Hank Paulson rejected the use of public money to save Lehman, and so in September 2008, Lehman filed for bankruptcy. However, shortly afterwards, Paulson announced AIG’s $85bn bailout, confusing investors with this message. Lehman could fail, but AIG couldn’t? In response to a deteriorating economy, Paulson pushed forward a plan where the US government purchased $500bn worth of toxic assets. After failing to pass congress, he redrafted the plan to assume direct ownership of stocks in banks. The Troubled Asset Relief Program (TARP) was hence created to normalise banks and increase investor confidence, putting the market back on the path to recovery. 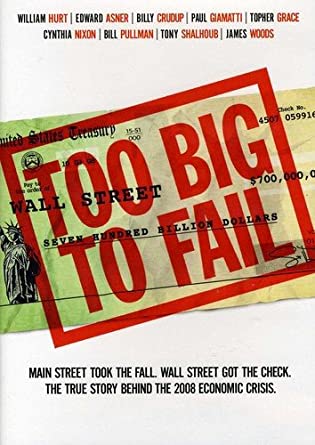 Financial concepts from the Too Big To Fail film

Too Big to Fail (TBTF)

The name of this film is a financial term referring to institutions which are so large and essential to the functioning of the economy that they cannot be allowed to collapse, no matter the cost to the taxpayer. This was the logic behind the $182 billion bailout the US government provided to AIG, for example, along with the relief funds directed to titans like JPMorgan Chase, Citigroup, and the Big Three automotive companies.

Moral hazard is a term used to describe how if a party is protected from risk, they will increase their risk tolerance and act less cautiously. In the context of banking, if the leaders of major banks feel confident that they are too big to fail – that is, that the government will bail them out – they will make increasingly risky decisions with the confidence that taxpayer dollars will rescue them if their bets go bust.

One of the first banks to fail, Bear Sterns’ hedge funds had accumulated over $20 billion in collateralised debt obligations (CDOs) and exposure to other toxic assets. In March 2008, due to the subprime mortgage crisis, Moody’s downgraded Bear’s MBS to Grades B and C (junk bond levels) and triggered a bank run leaving Bear with only $3.5 billion in cash. As Bear relied on repurchase agreements (short-term loans) – meaning it traded its securities to other banks for cash – Bear imploded when other banks called in their repos and refused to lend more. Bear’s insolvency forced a rescue organised by the Federal Reserve, where JPMorgan Chase bought out the bank for $2 a share (one month prior to this share price was $48). Bear’s demise triggered a panic on Wall Street and caused a banking liquidity crisis, where banks became unwilling to lend to each other. This is often used as a marker for the beginning of the 2008 financial collapse.

On September 15th, 2008, the investment bank Lehman Brothers filed for bankruptcy. It was the biggest filing in U.S. history, with Lehman’s holding $691 billion in assets at the time. By the end of trading that day, $700bn had been wiped off the global stock markets. The Dow Jones had plummeted 500 points, its biggest drop since the terrorist attacks of 9/11. Lehman then sold its IB and capital markets operations to Barclays, kickstarting a global liquidity crisis.

A $700 billion bank bailout bill was signed on October 3, 2008 and was used to establish the Troubled Assets Relief Program (TARP). The fund was used to launch the Capital Purchase Program, which included buying $105 billion in preferred shares in Chase, Wells-Fargo, Goldman and five other leading banks. The insurance giant AIG had also become a major seller of credit default swaps to boost its profit margin, which insured the assets that supported corporate debt and mortgages. If AIG went bankrupt, it would trigger the bankruptcy of many of the financial institutions that had bought these swaps. TARP funds contributed $67.8 billion to the $182 billion AIG bailout, and also used $80.7 billion to bailout the Big Three auto companies.

In addition to the TARP, $75 billion was put aside to help homeowners refinance or restructure their mortgages. HOPE NOW required the Treasury Department to both guarantee home loans and assist homeowners in adjusting mortgage terms.

Although TBTF banks were not the sole cause of the recent financial crisis and Great Recession, given the scale of job losses, home foreclosures, lost savings and costs to taxpayers, there is no question that their presence at the centre of the financial system contributed significantly to the magnitude of the crisis and to the extensive damage it inflicted across the economy.

Major changes were made to prevent another financial crisis, including introducing stricter capital requirements and ensuring banks are less interconnected or vulnerable to contagion. However, some familiar risks are creeping back, and new ones have emerged as global debt continues to grow – for many countries, the combination of large debts in foreign currencies and weakening local currencies is becoming harder to sustain.

A key takeaway is the intertwined relationship between politics and finance. Moral hazard asserts that ties between bankers and politicians create dangerous incentives for both parties and indicates the importance of observing not just numbers in our market research, but also non-quantifiable factors which influence expectations.

Learn from the Past

Note that “too big to fail” is a phrase still used today in finance and big business. For example, “Is Facebook too big to fail?” As well, while significant progress has been made to strengthen financial systems internationally, the biggest banks are most likely still too big to fail. It’s useful to be aware of this potential risk to an economy when considering the roles that massive companies and institutions play in our society. Economists will always speculate that we may be “overdue” for another crisis and learning from the past is the best way to prepare for the next crisis.

SimTrade is your introduction to the global financial market; through a combination of theory and simulations, you learn to develop your confidence in your decision making and critical thinking skills. The course teaches you how to analyse the impact of events on expectations and stock prices, eventually teaching you how to build a position and make the market work for you.

Famous quote from the Too Big To Fail film

Paul Giamatti: “I spent my entire academic career studying the Great Depression. The depression may have started because of a stock market crash, but what hit the general economy was a disruption of credit. Average citizens unable to borrow money, to do anything. To buy a home, start a business, stock their shelves.”

Trailer of the Too Big To Fail film

▶ Gupta A. Analysis of the Margin Call movie

This entry was posted in Contributors, Culture, Movies and documentaries and tagged 2008 financial crisis, Movie, Wall Street. Bookmark the permalink.

2 Responses to Film analysis: Too Big To Fail