Linear regression is a basic and one of the commonly used type of predictive analysis. It attempts to devise the relationship between two variables by fitting a linear function to observed data. A simple linear regression line has an equation of the form:

Figure 1. Example of beta estimation for an Apple stock 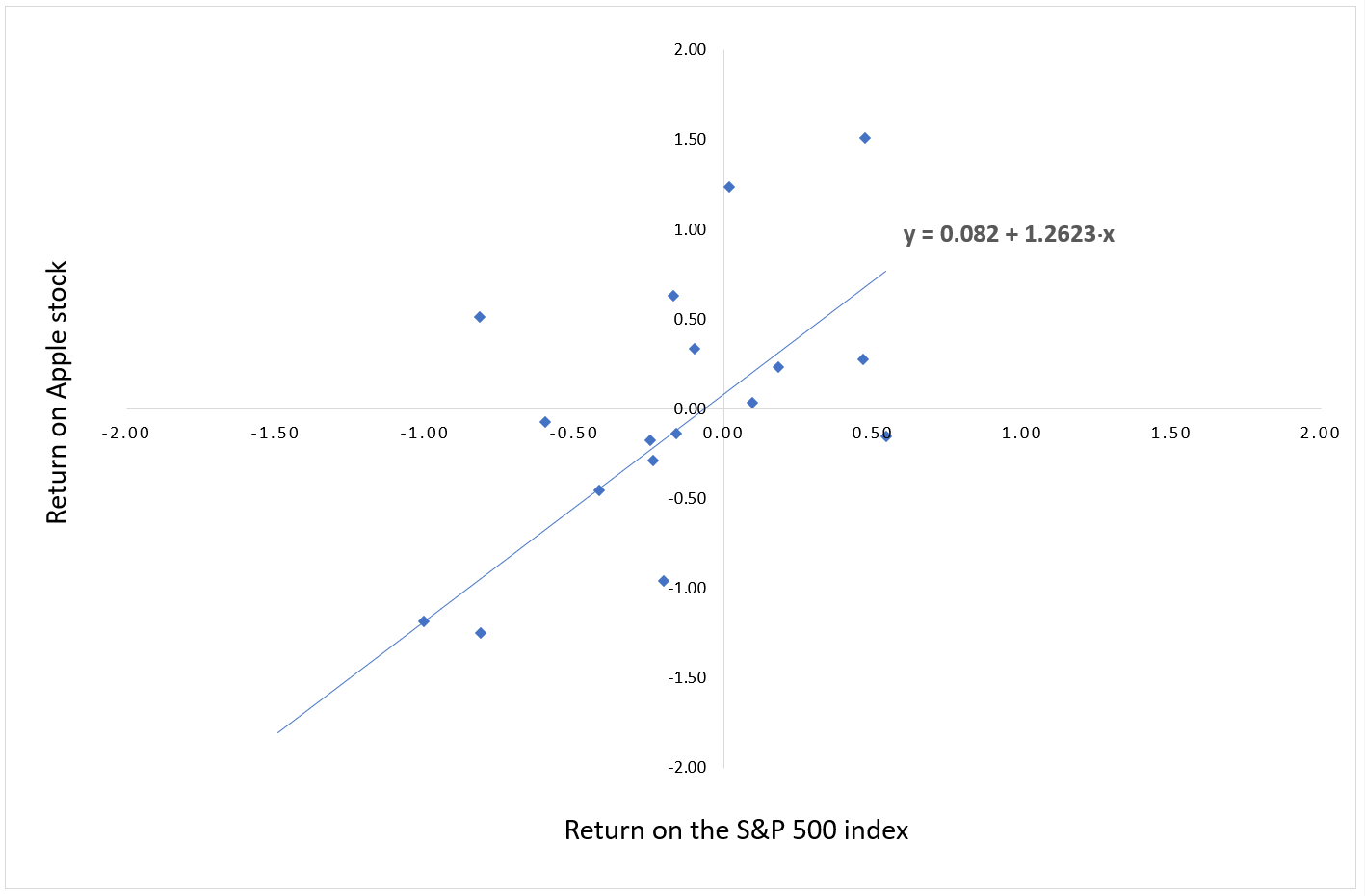 Before attempting to fit a linear model to observed data, it is essential to determine some correlation between the variables of interest. If there appears to be no relation between the proposed independent/explanatory and dependent, then the linear regression model will probably not be of much use in the situation. A numerical measure of this relationship between two variables is known as correlation coefficient, which lies between -1 and 1 (1 indicating positively correlated, -1 indicating negatively correlated, and 0 indicating no correlation). A popularly used method to evaluate correlation among the variables is a scatter plot.

The overall idea of regression is to examine the variables that are significant predictors of the outcome variable, the way they impact the outcome variable and the accuracy of the prediction. Regression estimates are used to explain the relationship between one dependent variable and one or more independent variables and are widely applied to domains in business, finance, strategic analysis and academic study.

Assumptions in the linear regression model

The variables should be measured at a continuous level. For example, time, scores, prices, sales, etc.

The variables in consideration must share a linear relationship. This can be observed using a scatterplot that can help identify a trend in the relationship of variables and evaluate whether it is linear or not.

No outliers in data set

An outlier is a data point whose outcome (or dependent) value is significantly different from the one observed from regression. It can be identified from the scatterplot of the date, wherein it lies far away from the regression line. Presence of outliers is not a good sign for a linear regression model.

The data should satisfy the statistical concept of homoscedasticity according to which, the variances along the best-fit linear-regression line remain equal (or similar) for any value of explanatory variables. Scatterplots can help illustrate and verify this assumption

The residuals (or errors) of the regression line are normally distributed with a mean of 0 and variance σ. This assumption can be illustrated through a histogram with a superimposed normal curve.

Once we have verified the assumptions for the data set and established the relevant variables, the next step is to estimate β0 and β1 which is done using the ordinary least squares method. Using OLS, we seek to minimize the sum of the squared residuals. That is, from the given data we calculate the distance from each data point to the regression line, square it, and calculate sum of all of the squared residuals(errors) together.

Thus, the optimization problem for finding β0 and β1 is given by:

After computation, the optimal values for β0 and β1 are given by: 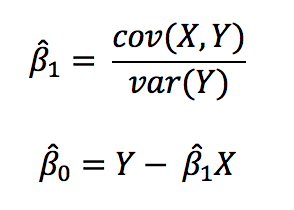 Using the OLS strategy, we can obtain the regression line from our model which is closest to the data points with minimum residuals. The Gauss-Markov theorem states that, in the class
of conditionally unbiased linear estimators, the OLS estimators are considered as the Best Linear Unbiased Estimators (BLUE) of the real values of β0 and β1.

R-squared value of a simple linear regression model is the rate of the response variable variation. It is a statistical measure of how well the data set is fitted in the model and is also known as coefficient of determination. R-squared value lies between 0 and 100% and is evaluated as:

The greater is the value for R-squared, the better the model fits the data set and the more accurate is the predicted outcome.

This entry was posted in Contributors, Financial techniques and tagged Beta, Regression. Bookmark the permalink.

One Response to Linear Regression