In this article, Bijal GANDHI (ESSEC Business School, Master in Management, 2019-2022) explains the concept of GDP.

This read will help you understand in detail the calculation, components, variations, and drawbacks of GDP.

Gross domestic product refers to the total monetary value of all finished goods and services produced within a geographical region during a specific period. The final value of the product is taken into consideration instead of the product components to avoid double-counting. The GDP is calculated for a country on an annual basis through data gathered from surveys and trade flows. The calculation is generally undertaken by the country itself and occasionally by the UN agencies like the World Bank and IMF. As discussed in Economic Indicators post, the GDP is helpful in estimating both the value of an economy and its growth rate.

The GDP is primarily calculated through the following three approaches. All three methods would yield the same results if computed correctly.

As the name suggests, this approach calculates the total spending by different participants in the economy. Therefore, the following formula is used:

where C represents consumption, G government spending, I investment, and (X-M) exports net of imports. Consumption is the largest and the most significant component of the GDP calculation. Consumers spend on goods and services and their willingness to spend reflects their level of confidence in the economy. Government spending refers to the sum of government consumption plus the total amount invested/spent to generate benefits for the residents. Investment by businesses is the sum of all the money invested in business activities or capital expenditures made to boost the businesses in an economy. Net exports are the total value of exports less the total value of imports. In the U.S., the Bureau of Economic Analysis (BEA) adopts the expenditure approach to calculate the GDP. The following is a snapshot of the U.S. GDP for Q3, 2020. 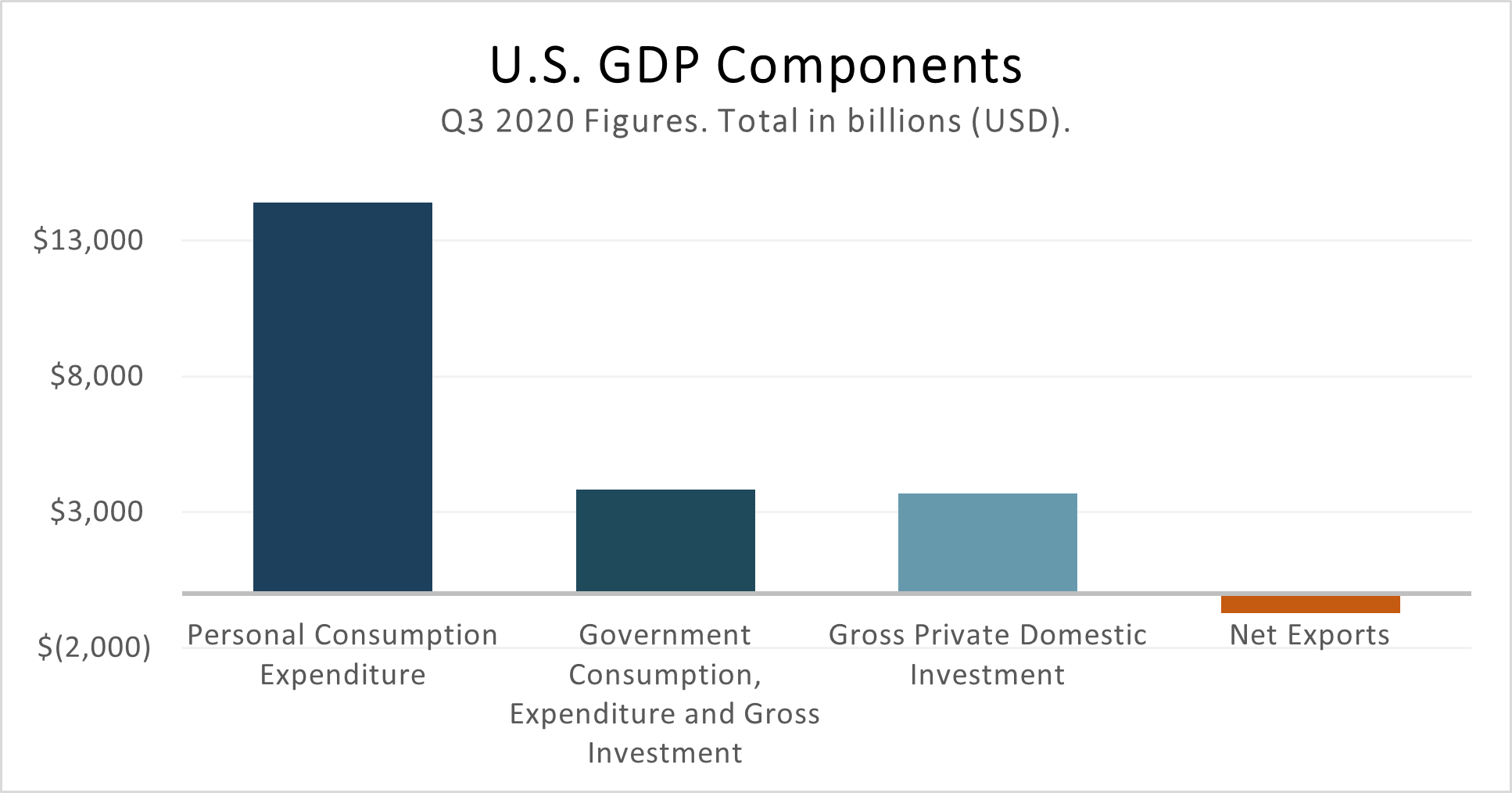 The income approach is based on the accounting logic that the total expenditures in an economy should be equal to the total income generated by the production of all the goods and services in that economy. Here, the assumption is that all revenues eventually go to either one of the four factors of production such as land, labor, capital, or entrepreneurship. Therefore, all the income generated through these factors like rent, wages, return on capital and corporate profits are summed and adjusted with taxes and depreciation.

The total value of output generated by all the industries in an economy is summed in order to derive the GDP through the production approach. The cost of intermediate goods used in the production of this output is deducted from this value to avoid double-counting. Therefore, the gross value added is basically the total output less intermediate consumption. 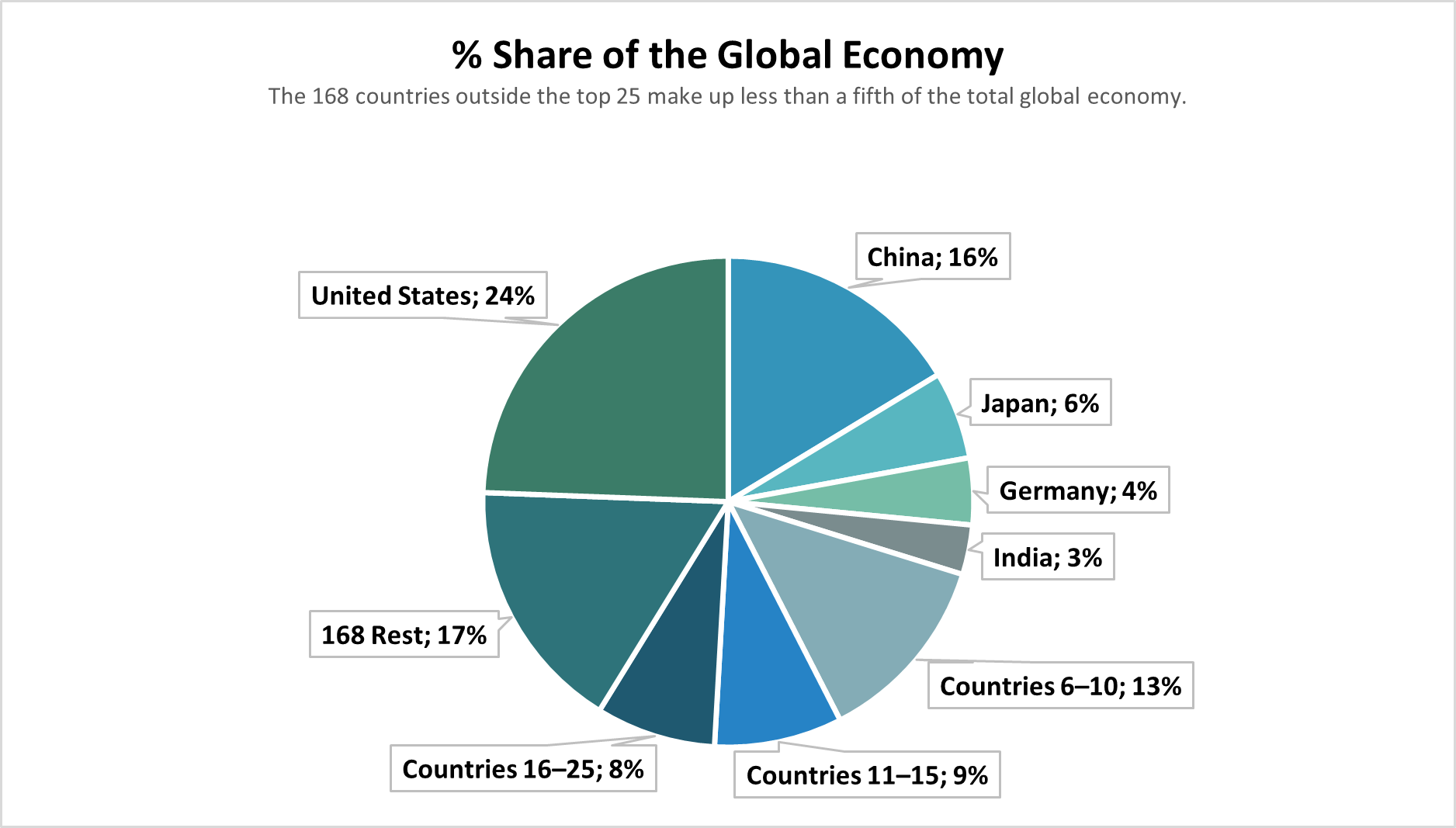 The GDP growth rate is the percentage change in the GDP from one period to another. It compares one year/ quarter to another and helps policymakers take informed decisions. A negative growth rate for consecutive years suggests that the economy is contracting which further signals a recession. A very high growth rate is an indication of inflation. According to economists, a growth rate of approximately 2% is ideal for sustainable economic growth.

GDP cannot be directly compared from one country to another due to the difference in the population size. One of the methods to make GDP comparable would be to use GDP per capita. In GDP per capita calculation, the total GDP is divided by the number of residents in the country. This helps in direct comparison of the standard of living of the residents of two or more nations. The real GDP per capita would be one of the optimal methods as it eliminates the effects of inflation and exchange rates as well. The following graph is the per capita growth rate of China from 1980 to 2019. 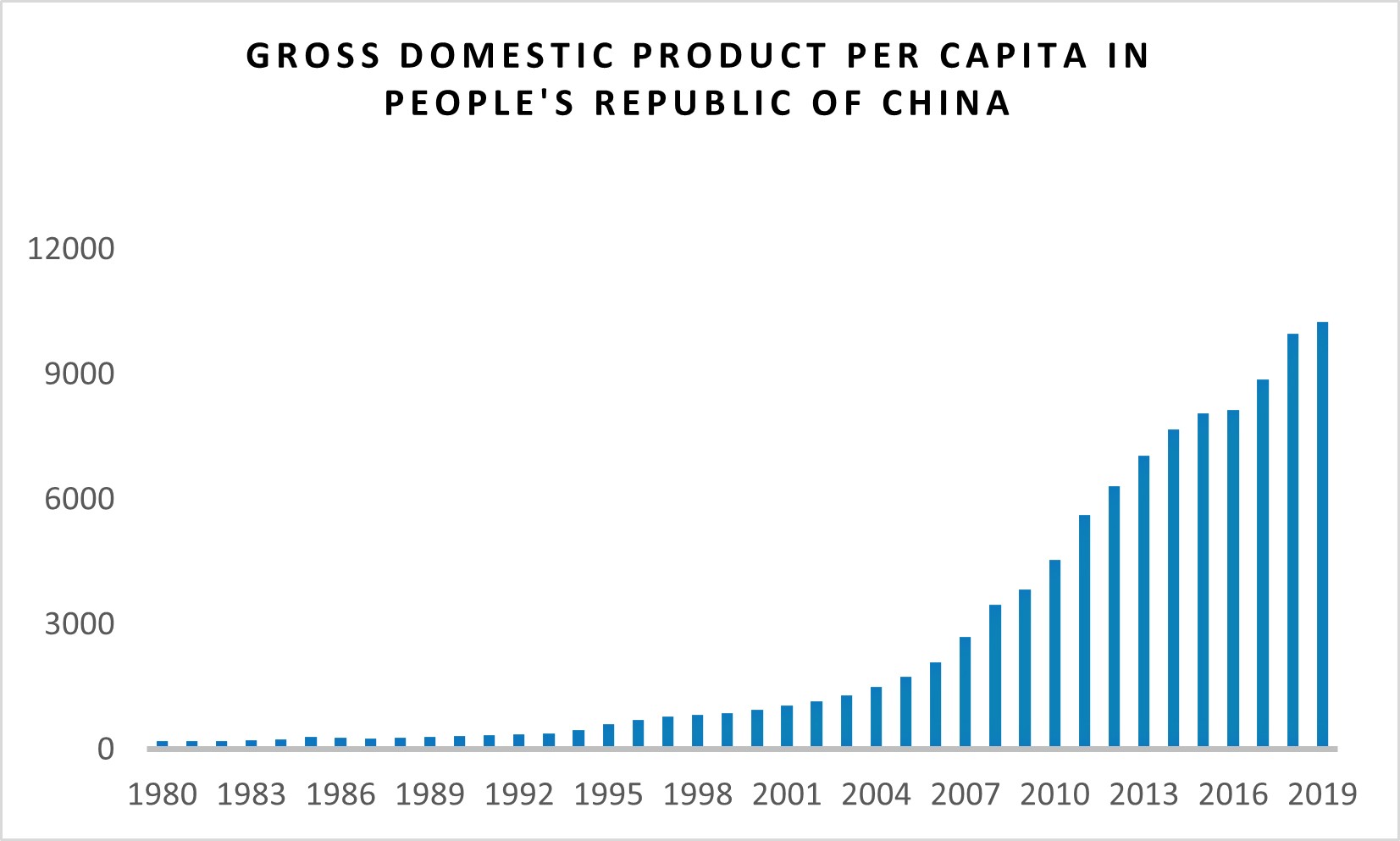 To make GDP comparable, it is also necessary to adjust for differences of the local currency and the exchange rate. The purchasing power parity method is used to make cross-country comparisons using the real outputs, living standards and real income.

Even though a lagging indicator, the GDP is a very important economic indicator for investors. This is because the GDP data aids investors in making comparisons and adjustments for their asset allocation. Being a direct indicator of the condition of the economy, it helps investors make well informed decisions even for their funds in other developed and developing nations. The GDP report is a good source of information and data related to inventory, corporate profits, and operating cash flows of different sectors of the economy. Also, investors can make rough estimations of the equity market value through the ratio of total market capitalization to GDP. To conclude, GDP provides a good decision-making framework for investors.

Even though very useful, GDP has its own share of drawbacks. The major drawback is that it does not consider the value generated through informal and illegal trade. The activities in the black market are unaccounted for and therefore this results in underestimating the actual output. Also, unpaid work and services like volunteering are not considered, even though they have a significant impact on the economy.

Another major flaw could be that it ignores the environmental costs of producing the output. The impact on the well-being of society and the costs attached to the same are ignored while calculating the GDP. Similarly, every expense or income by the government or individual is included irrespective of whether they were productive or not. Therefore, even the unproductive output regularly contributes to the GDP growth rate.