In this article, Bijal Gandhi (ESSEC Business School, Master in Management, 2019-2022) elaborates on the concept of Consumer Price Index.

This reading will help you understand the meaning, calculation, uses and limitations of Consumer Price Index.

What is Consumer Price Index?

The Consumer Price Index (CPI) is a statistical estimation to measure the aggregate price level in an economy. It measures the change in the price level of a basket of consumer goods and services, purchased by households and businesses. This basket is a market basket which is an amalgamation of goods and services most used by consumers. The CPI is a means to acknowledge the changes in the purchasing power of a country’s currency. It can be further used to compute the cost of living. The change in CPI is used to measure inflation in the economy.

Statistical agencies compute CPI to understand the price change of various commodities and keep a track of inflation. CPI is also an important medium to understand the real value of wages, salaries, and pensions. In most of the countries, CPI is one of the most closely watched national economic statistics.

The calculated CPI acts as an indicator for inflation in an economy. For example, if the CPI is 120, it means that there has been a 20% rise in the prices of the market basket compared to the base period. Similarly, an index of 95 indicates a 5% decrease in the prices of the basket compared to the base period. The following graph tracks the CPI from 1950 till 2020 for the U.S city average. 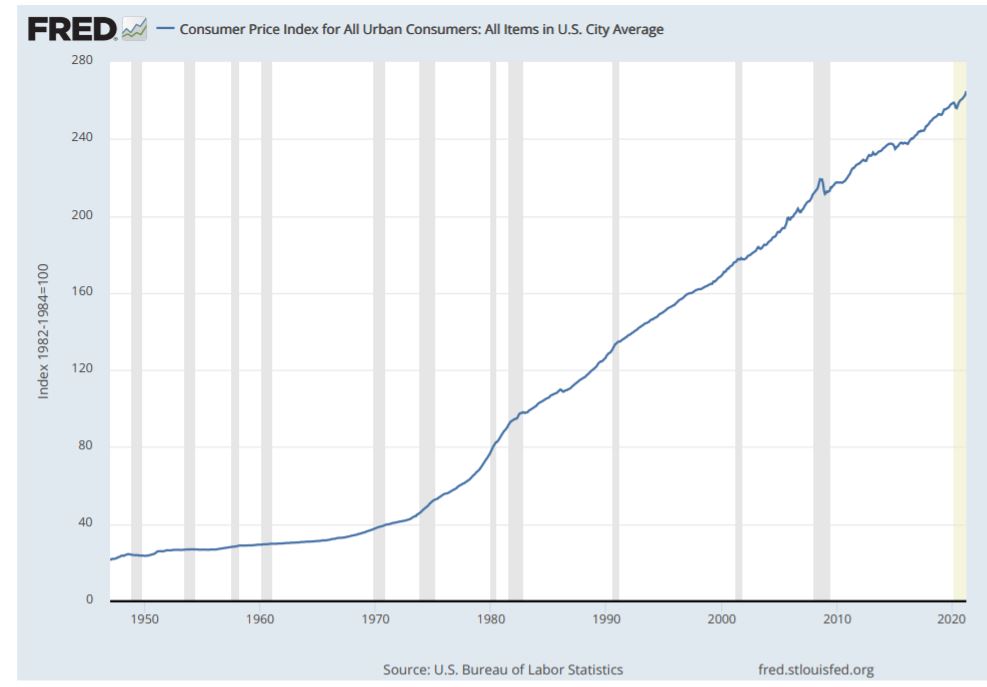 A specific good or service is added to the basket after an initiation process. For example, the initiation process for shoes goes as follows: let us assume that there are three types of shoes A, B, and C, which make up 70%, 20% and 10% of the shoe market, respectively. The choice of the shoe is directly related to the sales figures. In this case, shoe A is being chosen as it represents 70% of the market share. After the selection, this shoe will continue to be priced each month in the same store for the next four years after which a new representative will be chosen.

Uses of the Consumer Price Index

CPI acts as an economic indicator since it is a measure of inflation in an economy. It can help in determining the purchasing power of an economy. It also aids the government in the formulation and effective implementation of a government’s economic policies. It is also used for the adjustment of other economic indicators for price changes. For example, the CPI is used to adjust various components of national income. Since CPI is an indicator of the cost of living in an economy, it helps to provide adjustments to the minimum wages and social security benefits available to the residents of a country.

Limitations of the Consumer Price Index

Limitations in measurement of the CPI

This entry was posted in Non classé. Bookmark the permalink.