The Wall Street movie released in 1987 is an American drama film based on the life of a junior stockbroker aiming to work with a major Wall Street player in America.

The movie has been regarded as the most iconic film of the 1980s throwing light on the capitalistic trading mentality existing in one of the world’s largest financial markets. It replicated the drastic changes that daring corporate raiders introduced in the financial system. It focuses and enlightens us on concepts of a financial market that we observe in our daily life, which also correlates with some of what we study in the SimTrade course. 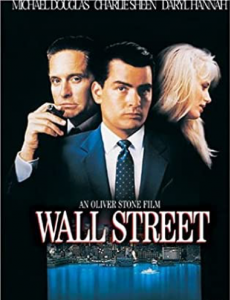 Key Characters in the movie

The movie starts by introducing a character named Bud Fox, who is a junior stockbroker at Jackson Steinem & Co, a New York City-based firm. Aspiring to work with one of the leading Wall Street players named Gordon Gekko, Bud Fox visits Gekko’s office carrying a box of contraband Cuban cigars on his birthday.

In response to Bud’s gesture and courage, Gordon Gekko offers him an opportunity for an interview that Bud has always longed for. Being unable to impress Gekko, Bud takes the extra step and plays his last card. He imparts some inside information about Bluestar Airlines to Gekko which he overheard from his father.

Impressed by the act, Gekko ends up placing an order for Bluestar Airlines’ stocks and becoming one of Fox’s clients. Over the next few months, Fox made several stock deals for Gekko but none showed an increase. Furious Gekko offers a last chance to Bud for him to keep his job. Desperate to continue working with Gekko, Fox agrees to spy on a British CEO and a corporate raider, Lawrence Wildman, and discern his upcoming plans of investments. By following him, Fox learns about an investment Wildman is planning to make in a major steel company named Anacott and take the controlling interest. By leaking the news in the press, Gekko buys the controlling shares before Wildman and sells him the same for a lucrative profit.

The deal leaves Bud significantly rich and provides him with a lot of additional perquisites. He goes on to engage in illicit trading activities and makes a lot of money for Gekko and himself. In the dark, Bud does not realize that he is being put on the hotlist by the SEC.

Bud pitches a plan to Gordon Gekko, which is to expand the Bluestar Airlines after buying it. Bud does all in his power to push the deal through. But in no time he learns about the plan Gordon has, to sell all the assets once the stock peaks, thus leading the company in ashes. Being racked with the guilt of leading all the employees into unemployment, Bud plans to manipulate the stock. He also arranges for a secret meeting with Lawrence Wildman and convinces him to buy a controlling stake in Bluestar Airlines with a significant discount.

On the execution day, Gordon Gekko, realizing that his stocks are plummeting, gets rid of his remaining stake in the company on Bud’s advice, ending up in losses. But soon, Gekko finds out about the plot set up by Bud Fox and Wildman to deceive him.

To teach a lesson to the young broker, Gekko informs the SEC about the insider trading and unethical practices undertaken by Bud Fox to make illicit gains. However, Bud ends up cooperating with the SEC to get a lighter sentence and helping SEC arrest Gordon Gekko.

The relevance of the Wall Street movie for the SimTrade course

The SimTrade course focuses on the concepts of observing the market news and using types of orders to trade and create value at the end of the trading period, which of course goes into detail. The movie correlates with the concept of market efficiency where it shows that the market functions as a semi-strong efficient market at best. Since private inside information is not embedded in the market price of the stock, there is a possibility to make gains higher than the market gains by bringing it into use. It also shows how demand and supply play a fundamental role in any financial market, driving the prices in either direction. Moreover, it establishes the importance of a buyer, a seller and a common trading platform for a transaction to occur.

The ending of the movie is quite relevant portraying how illicit and unethical behavior is dealt with in present-day markets. It also shows how effective measures have been put in place by governments throughout the world to provide traders with a transparent and efficient financial market.

Famous quote from the Wall Street movie: « Greed is good »

Watch Gordon Gekko explaining « Greed, for the lack of a better word, is good » to the shareholders during the General Meeting of their company.

This entry was posted in Contributors, Culture and tagged Movie, Wall Street. Bookmark the permalink.