It is no secret that stock prices are all-time highs and people have been asking the important question: are we in a stock market bubble? According to the Warren Buffett Indicator, the answer to that question is YES.

Let’s discuss what exactly the Warren Buffett Indicator is, why it is showing that this stock market is the most overvalued in history and why the stock market would have to fall by more than 50% to be considered fairly valued based on historical averages.

Definition and origin of the Warren Buffett Indicator

The Warren Buffett Indicator is defined as the ratio between the US Wilshire 5000 index to US Gross Domestic Product (GDP). In other words, it is the American stock market valuation to US GDP divided by the size of the American economy.

It is used to determine how cheap or expensive the stock market is at a given point in time. It was named after the legendary investor Warren Buffett who called in 2001 the ratio “the best single measure of where valuations stand at any given moment”. It is widely followed by the financial media and investors as a valuation measure for the US stock market and has hit an all-time high in 2021.

To calculate the Warren Buffett Indicator, we need to get data for both metrics: the US Wilshire 5000 index and the US GDP.

To determine the total stock market value of the US, Warren Buffett uses the Wilshire 5000 index. This index is a broad-based market capitalization weighted index composed of 3,451 publicly traded companies that meet the following criteria:

The Wilshire 5000 index is a better measure of the total value of the US stock market than other more popular stock market indices such as the S&P500 the Dow Jones or the NASDAQ. In the case of the S&P500, it only measures the 500 largest US companies. The Dow Jones has only 30 component companies and the NASDAQ consists of mostly tech companies and excludes companies listed on the NYSE. On the other hand, the Wilshire 5000 is often used as a benchmark for the entirety of the US stock market and is widely regarded as the best single measure of the overall US equity market.

In 2021, the market capitalization of the Wilshire 5000 is approximately 47.1 trillion dollars.

The US GDP which represents the total production of the US economy. It is measured quarterly by the US Government’s Bureau of Economic Analysis. The GDP is a static measurement of prior economic activity meaning it does not forecast the future or include any expectation or evaluation of future economic activity or growth. In 2021, the US GDP is 22.7 trillion dollars.

Without any historical context this number doesn’t say anything so let’s dive into it.

Evolution of the Warren Buffett Indicator

Use of the Warren Buffett Indicator for investment

But what does this mean for future investing returns? Over the last 10 years the S&P500 returns have been extremely strong at an average of 12.5% per year – well above historical trends.

Warren Buffett said at the time that 13% return is impossible if you strip out the inflation component from this nominal return which you would need to do. However, inflation fluctuates that’s 4% in real terms and if 4%.

Two years after the November 1999 article when the Dow Jones was down to 9,000, Warren Buffett stated: “I would expect now to see long-term returns somewhat higher [around] 7% after costs”. He revised his expectations for future returns higher because the Warren Buffett Indicator had come down significantly from its high of 130% in November 1999 to 93% just two years later – meaning stocks were more fairly valued and as a result prospective future returns were higher.

In October 2008, after the S&P500 had fallen from a high of greater than 1,500 in July 2007 to around 900, Warren Buffett wrote “Equities will almost certainly outperform cash over the next decade probably by a substantial degree. At that moment, the indicator was at around 60%. This was not a popular prediction and people were selling out of stocks because they were worried about the future. They had seen stock prices fall consistently and wanted to sell out of stocks before they kept falling more. Since Warren Buffett made this call in October 2008, the S&P500 has returned an average annualized return of 14.7% with dividends reinvested. This return is significantly higher than the long-term historical return of the stock market.

To grasp the Warren Buffett Indicator has been a good gauge of future stock market returns, it is needed to understand the reason stocks can’t rise 25% or more a year forever. This is because over the long term, stock market returns are determined by the following:

The higher the interest rate, the greater the downward pole. This is because the rate of return that investors need from any kind of investment is directly tied to the risk-free rate that they can earn from government securities. As Warren Buffett explained: “If the government rate rises the prices of all other investments must adjust downward to a level that brings their expected rates of return into line. If government interest rates fall, the dynamic pushes the prices of all other investments upward”.

That being said there are some points that we add to discuss this perspective.

Figure 2 represents the history of interest rates in the US for the period 1960-2021.

Figure 2. History of interest rates in the US. 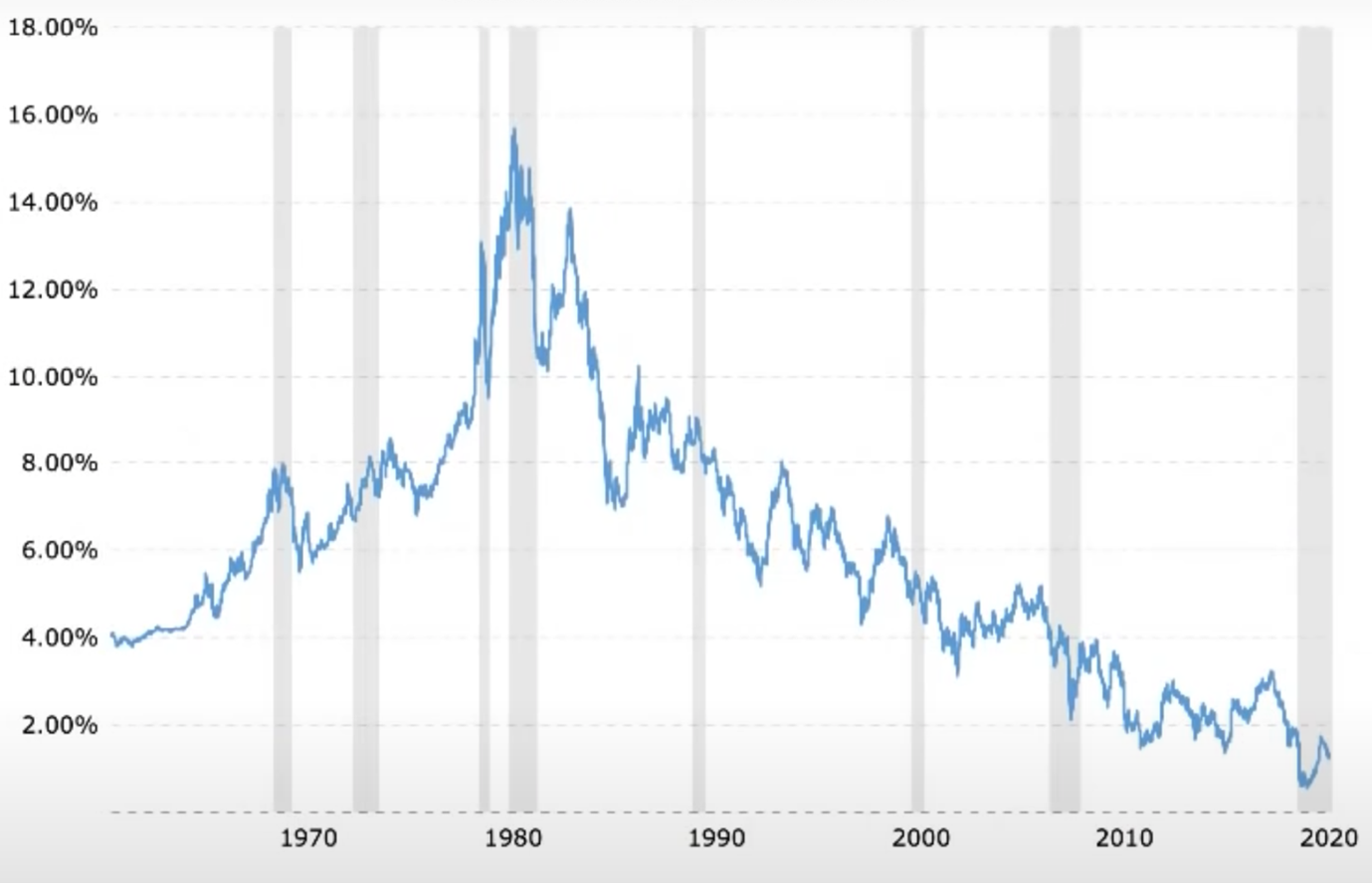 This figure shows that the current interest rate on 10-year US government bonds has never been so low. This extremely low level of interest rates partially helps to explain the high stock market valuation by historical standards. As Warren Buffet stated: “As interest rates rise stocks become less valuable and as interest rates decrease stock prices increase all else being equal”.

Companies are staying private for longer

You might be interested in this topic if you are aware or are trying to get knowledge around the stock market and the possible crash that is being discussed in 2021. This might help you understand what the current situation is and why we are talking about this. But it also gives you insights to understand how important this topic can become in the very near future.