The impact of the Russian invasion of Ukraine on Shell

The impact of the Russian invasion of Ukraine on Shell

In this article, Talia HAMMOUD (The George Washington University, BBA, 2019-2023) discusses the impact of the Russian invasion on Shell, a large multinational oil company.

Shell PLC is a British publicly traded multinational oil and gas company headquartered at in London, United Kingdom. It is one of the largest energy and petrochemical companies in the world, supplying all over the world.

The relationship between Ukraine and Russia was tense since Ukraine gained its independence from the USSR in 1991. Since then, Russia annexed Crimea claiming it belonged to them as well as massing soldiers on the Ukraine-Russia border in 2021. On the 24th of February 2022, Russia invaded Ukraine, starting a full-blown war in Eastern Europe. In an effort to condemn Russia, many multinational companies announced they would withdraw or completely halt operations in the country.

Shell announced plans to withdraw from Russian oil just as people close to the matter say a plan is in the works by the Biden administration to ban Russian oil imports into the U.S. Due to this withdrawal, Shell announced that it anticipates account charges from $4 billion to $5 billion in its first quarter of 2022. This move caused American depositary shares of Shell to rise by 2.7% Tuesday, 8th March.

When it was first revealed that Shell was still buying discounted Russian oil after other oil companies announced their withdrawal on March 4th, Shell’s market shares plummeted by 5.73%. This shows that the market is efficient and was informed of Shell’s decision as many condemned them for still supporting Russia. There was increased market pressure for Shell to cut ties with all Russian oil suppliers. On March 8th, Shell apologized and announce its withdrawal from Russia as well as stopping all oil purchases from there. Thus, the market increased by 1.05% on March 8th. 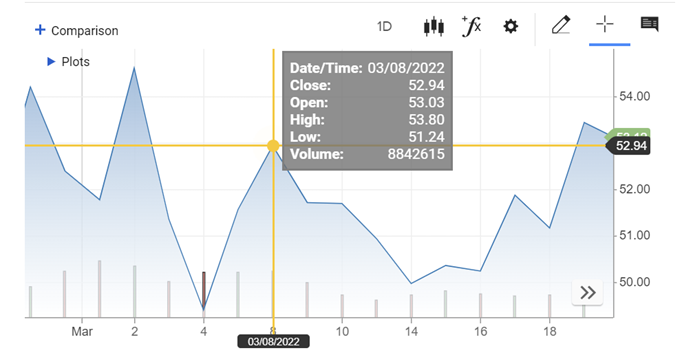 Why this is important?

Firstly, it shows how volatile the oil market is as short-term demand for energy responds much faster to changes in growth than to price changes, especially due to the current Russian invasion of Ukraine, and how an act of war can impact millions around the world due to price increases of oil. This inherently impacts a big oil company such as Shell. However, I think that the market stocks rose in support of Shell withdrawing from Russian contracts and territories even though it is very costly as shown by the almost $5 billion in accounting costs for the first quarter. I think that this is an efficient market as stocks began to rise right before the announcement of this withdrawal was revealed showing that people were expecting Shell and other big oil companies to withdraw from Russia due to immense public pressure to condemn the Russian invasion of Ukraine.

The market is quite efficient as the stock chart reflects all relevant information about Shell and its actions. For example, the announcement of Shells withdrawal in Russia is reflected in the market price of the day it was announced.

Volatility represents the rate at which the price of a stock increases or decreases over a particular period. Higher stock price volatility often means higher risk and helps an investor to estimate the fluctuations that may happen in the future.

▶ All posts about financial news in the SimTrade blog

This entry was posted in Contributors, Financial news and tagged Market efficiency, Shell. Bookmark the permalink.